Bribery? Atlantic Mag Urges Dems to ‘Give Manchin Whatever He Wants’ 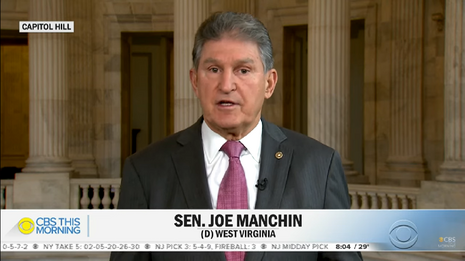 Atlantic magazine writer  Annie Lowrey doesn’t even try to be very subtle about it. The headline of her story on Wednesday flat out makes it clear what she wants, “Give Joe Manchin Whatever He Wants.” And if you can’t figure out what she is getting at in the title, the subtitle goes into even more detail, “Why shouldn’t Democrats bring back earmarks and curry his favor with a few sky bridges and concert halls?“

Lowrey makes the case that Democrats should, essentially, bribe Manchin in order to make him more supportive of legislation being pushed by the party.

You may have seen this meme going around: a futuristic, utopian rendering of a city with gleaming skyscrapers, jet-suited commuters, and hanging gardens. The caption: “West Virginia after we’re done bribing Joe Manchin.”

January’s Georgia runoff elections delivered Democrats the most tenuous possible control of the Senate, and gave Manchin, the most conservative member of the caucus, a functional veto over legislation. A $15 minimum wage, $2,000 checks, universal preschool, green-jobs initiatives: The question is not whether elected Democrats want them, but whether they can get the senator from West Virginia to support their inclusion in the handful of budget reconciliation bills they will be able to get through Congress. Why shouldn’t Democrats curry his favor with a few sky bridges and concert halls?

How to provide the funds for the Manchin money effort? Earmarks!

They should, despite the fact that earmarks—formally known as congressionally directed spending, informally known as pork—have a tarnished reputation and have disappeared from policy making. In 2010, the Tea Party secured a ban on earmarks.

…In the 1990s and 2000s, earmarks were implicated in any number of scandals; unscrupulous politicians traded them for campaign contributions or directed projects to friends in exchange for kickbacks. Outright fraud aside, members’ ability to create pork projects made them bigger, more pliable marks for lobbyists. Moreover, the process could be unfair, directing money to long-tenured members’ districts and disadvantaging districts represented by Black or Latino members.

…Since the demise of the earmark, both Republicans and Democrats have voiced their quiet lamentations about the lost opportunities to secure money for needed projects and to win over their colleagues’ votes.

…Earmarks would not fix everything—structural reforms are desperately needed—but they might help a bit on the margins, making it more likely that moderate Democrats will vote with their caucus and making it more possible for moderate Republicans to cross over the aisle. For a better-functioning, more powerful legislature, some jet packs for West Virginians would be a small price to pay.