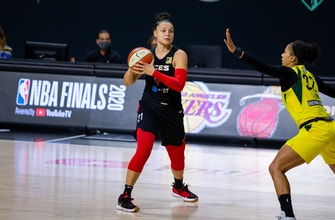 Kayla McBride is heading to Minnesota.

The veteran guard told WSlam! that she would be signing with the Lynx once free agents can officially ink deals Monday.

A person familiar with the situation confirmed to The Associated Press that a deal was in place. The person spoke to the AP on Wednesday on the condition of anonymity because no official announcement is allowed until Feb. 1.

“After talking to coach Reeve and the Minnesota staff, I know this is where I’m going to take my game to the next level,” McBride told the magazine. “And I know a lot of people are counting me out or doubting me.”

McBride has played her entire career for the Las Vegas franchise after getting drafted third in 2014 when the team was in San Antonio.

She averaged a career-low 12.5 points last season for the Aces, but helped them reach the WNBA Finals. The Notre Dame graduated has averaged 14.7 points over her career and shoots nearly 37% from behind the 3-point line.

She’ll be joining a strong core in Minnesota that includes the past two WNBA Rookies of the Year in Crystal Dangerfield and Napheesa Collier, as well as the league’s career leading rebounder Sylvia Fowles.

The Lynx have won four WNBA championships in the last 10 seasons. They lost in the semifinals of the playoffs last year to Seattle.