The Alto Collection Review: Two Beautiful Games, Now on PS4 and Xbox One

Upon their release, both the snowboarding game Alto’s Adventure and its sandboarding sequel Alto’s Odyssey were praised more for their atmosphere, the visual style, and the aesthetic, than the basic gameplay. Among the adjectives used by critics then to describe the two games were “laid back”, “mellow”, “relaxing”, and “soothing”. It’s almost as if the Alto titles were seemingly made for the pandemic times, when people are looking for something to take their mind off the invisible threat. After all, they even had a built-in “Zen Mode” where players didn’t have to care about high-scores or falling over, and could simply lose themselves in its beautiful environment.

That calming experience had been largely limited to phones, tablets, and computers (unless you had an Apple TV) for years since their respective release dates. That changes today with the launch of The Alto Collection, which packages both games — Alto’s Adventure and Alto’s Odyssey — for PC, PS4, and Xbox One, and coming soon to the Nintendo Switch. It’s the first time that either title is available on consoles, and also the first time that Alto’s Odyssey is available on PC. It’s also free for a week on PC thanks to the Epic Games Store.

The Alto Collection transfers said calming experience over to the big screen, with support up to glorious 4K HDR. There’s dynamic lighting and weather effects, publisher Snowman claims. But it could use a little optimisation, as we noticed some frame drops on the Xbox One X. They were infrequent, but they do exist.

Underneath that brush up, Alto’s Adventure and Alto’s Odyssey are the same endless runner games you remember. There are over 120 procedurally generated side-scrolling levels with 360 goals to accomplish, with the help of more than half a dozen characters and several upgrades to boot, such as a wingsuit, item drops, helmets, and pickaxes. And all of it is available with an upfront payment. You have to play to unlock all rewards; there are no microtransactions to bother you in The Alto Collection. There’s full-controller support too, though the only button that does anything in-game is “A” (Xbox) or “X” (PS4). Both are single button games essentially, which makes them perfect for gamers and non-gamers alike.

As always, you will use the button to jump over obstacles such as rocks and chasms. Holding it down allows you to perform backflips. Time it well and you will earn trick points. Time it wrong and you’ll crash, forcing you to restart. You can also earn trick points by grinding on flag poles, vines, wood bridges, and temple steps. Or by wall-riding (Alto’s Odyssey only), which is also controlled by holding down the same button. Sometimes, you’ll need to ride a wall and jump to clear a chasm. Or jump between different walls as you ride them, and then backflip. Or backflip off a ramp, or after you bounce off a hot-air balloon. It’s not about being inventive though, but clearing what’s thrown in front of you.

Your total score is a combination of your trick score, the coins you collect on your way (which are used to unlock the aforementioned upgrades), and how far you travel. Post the 2,000m mark, you’ll encounter live obstacles — a village elder in Alto’s Adventure, and lemurs in Alto’s Odyssey — which will chase you and try to stop you. You will have to increase your speed by pulling off tricks and maximising downhill runs, and eventually clear a chasm to get away from them.

Alto’s Odyssey is the more polished game of the two, as we had noted upon its original release, with more mechanics such as jumping on balloons and flying off tornadoes, and more variety in its biomes that in turn controls the types and frequency of the obstacles you encounter. Altogether, it makes for a more interesting game, though it’s beset by the same problem as its predecessor. Like with Alto’s Adventure, the goals you must hit to progress in Alto’s Odyssey are locked across levels. It’s possible that you might achieve an objective on your own in another level, but then have to redo it again when they are actually asked of you in a more advanced level. It’s annoying and feels like game padding.

As for having The Alto Collection on the TV, it naturally makes for a more immersive experience, though depending on your playstyle, your eyes might be fixated on a smaller portion of it. Alto’s Adventure and Alto’s Odyssey require you to continually scan what’s coming up ahead and make decisions accordingly. The challenge is that it doesn’t give you much of a window, with the character’s high speed — necessary to clear some obstacles and evade chasers — shortening that further. For us, it meant having to dart our eyes between the character and what’s incoming, switching as and when we were pulling off tricks. It’s possible that some might actually prefer the smaller screen due to this. 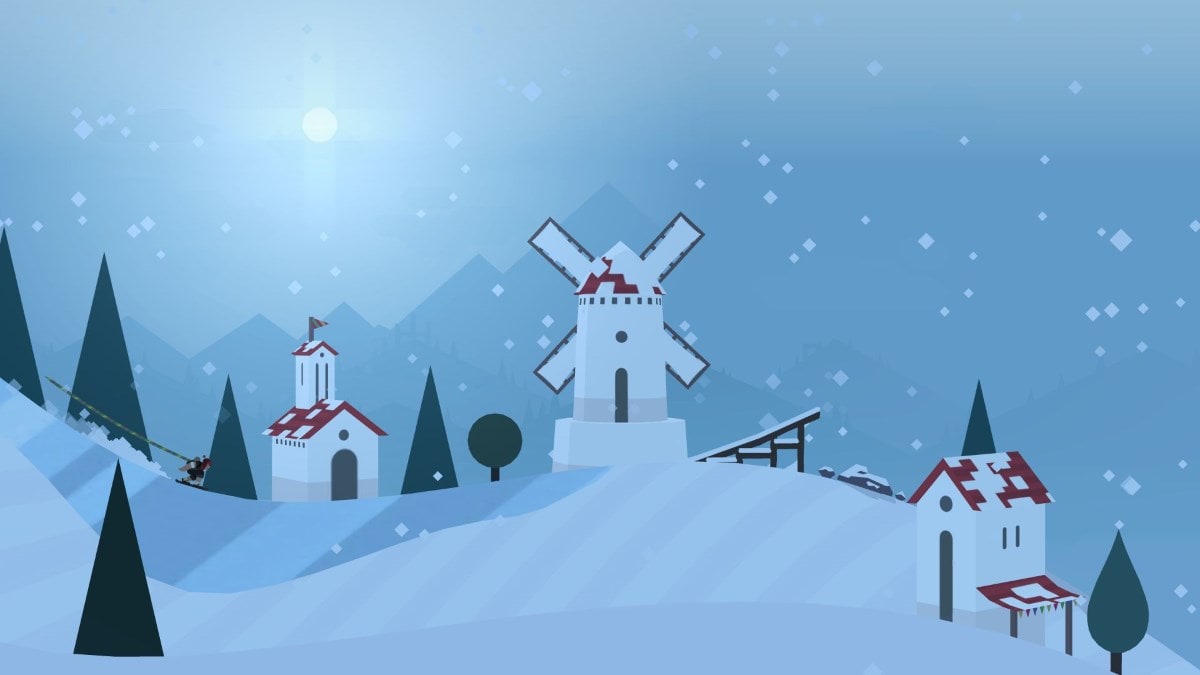 Of course, you can ditch all that and just spend your time in the aforementioned non-competitive Zen Mode, offered in both Alto’s Adventure and Alto’s Odyssey. It’s only when you’re not laser focused on avoiding rocks can you reflect and truly appreciate the beauty and simplicity of The Alto Collection. With a dedicated Zen Mode soundtrack by composer Torin Borrowdale — who has worked on Netflix’s Locke & Key, in addition to Aneesh Chaganty’s Searching — and a full day-night cycle that delivers some stunning vistas, the two Alto titles turn into an experience that you don’t want to leave. We even found ourselves keeping the game on in the background for its music, looking up every now and then to see how the art was transforming as the time of day changed.

To make the most of this, The Alto Collection ships with a new “Photo Mode”, allowing you to snap your time in the game — and make your own Alto’s Adventure and Alto’s Odyssey wallpapers. The photo mode in The Alto Collection is sadly limited though. It allows you to zoom and pan within the frame to compose your shots, but there’s no control over roll, pitch, and angle, let alone additional features such as filters, aperture control, time adjustment, or character customisation. It’s a welcome addition but it doesn’t maximise the potential of a photo mode, something that other games such as Ghost of Tsushima have understood better.

Still, The Alto Collection is a great way for newcomers to visit the dual worlds of Alto’s Adventure and Alto’s Odyssey, and a welcome return for those who have been here before, especially at a time when we need something to forget our worries and escape more than ever.