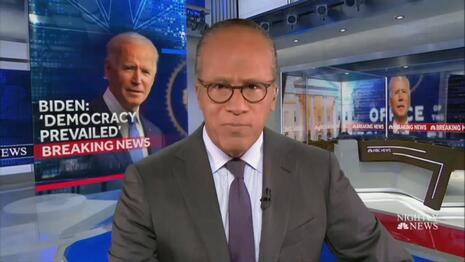 Few things provided a better example of the liberal media’s hypocrisy than when they praised something that they pushed to destroy. The latest version of this came from Monday’s NBC Nightly News, which featured anchor Lester Holt and Justice correspondent Pete Williams celebrating the Electoral College affirming President-elect Biden’s victory. But for the last four years, NBC has promoted the abolishment of the Electoral College because that was how President Trump won in 2016.

“President-elect Joe Biden took another critical step toward the White House today with the vote by the country’s electors, known as the Electoral College, formalizing his victory,” Holt cheerfully announced before handing it off to Williams.

As the video portion of Williams’ report began, the correspondent declared: “This is what the actual vote for president looks like (…) 538 presidential electors met around the country, pledged to vote for the winner of the popular vote in their states.”

Of course, he included footage of Georgia politician Stacey Abrams, who continued to push false claims that voter suppression was the reason she lost her race for governor.

“This process — nearly as old as the nation — has never before received this much attention,” Williams added.

But that’s not true. At least not on NBC.

Just about four years ago to the day, NBC political director Chuck Todd promoted so-called faithless electors to overturn the will of the American voters (you know, that thing Williams touted above) and the elimination of the Electoral process (Click “expand”):

Members of the Electoral College meet in less than a week to elect the president of the United States. But there is a growing group among them that want to make it anything but formality. Remember, the Constitution does not bind electors to follow the state’s popular vote. Most states have passed laws to force that though. Harvard professor and one-time Democratic presidential candidate Lawrence Lessig told me earlier today he was aware of at least 20 Republican electors who are considering casting a ballot for someone other than Donald Trump.

Todd went on to falsely suggest the Founding Fathers had created the Electoral College to be a type of chaperone to the rubes in rural parts of the country, thus the national popular vote should be the only thing that counted:

My point is, the Electoral College was the idea, a college of influencers, right, deciding whether the American public had made the right decision. If you are not going to ever allow them to exercise that power, than why — I’m not saying get rid of the Electoral College and the idea that a state is worth a certain amount of delegates. Then turn it into a delegate.

That was four years ago. But NBC’s eagerness to dismantle the U.S. Constitution had not subsided.

Just a year and a half ago, NBC featured the abolishment of the Electoral College in their “My Big Idea” series, which featured correspondent Harry Smith trying to massage and normalize radical Democratic proposals. And in an interview with Mayor Pete Buttigieg, Smith proclaimed that doing away with the Electoral College would “strengthen American democracy” somehow.

And yet, on Monday, Williams boasted: “The number of election lawsuits is now down to a trickle without a single significant Trump victory, and legal experts say after today’s vote the ability to change the result in court is gone.“

Amazing how the liberal media’s attitude changed when they got their way.

LESTER HOLT: President-elect Joe Biden took another critical step toward the White House today with the vote by the country’s electors, known as the Electoral College, formalizing his victory. Here’s Pete Williams.

PETE WILLIAMS: This is what the actual vote for president looks like.

WILLIAMS: 538 presidential electors met around the country, pledged to vote for the winner of the popular vote in their states.

GOV. CHRIS SUNUNU (R-NH): It is not just tradition but to show folks, especially now more than ever, our system works.

WILLIAMS: This process — nearly as old as the nation — has never before received this much attention. In Michigan, the state capitol where the electors met was closed to normal business over what officials said were security concerns.

As expected, Joe Biden received 306 electoral votes. Donald Trump 232. “In this battle for the soul of America, democracy prevailed,” Biden says in remarks prepared for a speech tonight.

The number of election lawsuits is now down to a trickle without a single significant Trump victory, and legal experts say after today’s vote the ability to change the result in court is gone.

EDWARD FOLEY (Moritz College of Election Law Director): Everything up until has been a prelude to this official moment today. And the Constitution makes today both the day and the last day.

WILLIAMS: The Electoral College ballots now go to Washington to be counted in a joint session of Congress January 6. But President Trump still refuses to concede. And today, one of his closest advisors told Fox News that his supporters will conduct their own electoral voting.

STEPHEN MILLER: Alternate slate of electors in the contested states is going to vote and we’re going to send those results up to Congress. This will ensure that all of our legal remedies remain open.

[Cuts back to live]

WILLIAMS: But there is no way to present any such alternative slate of electors officially. And besides, it would take a vote of both the House and Senate to accept them that won’t happen with the Democrats in control of the House. Lester?