Politico: From Tabasco Flood of Trump, We Sip Almond Milk with Biden 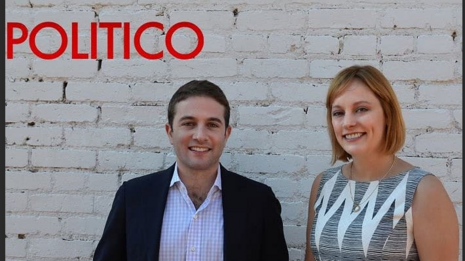 “This administration will be of the Georgetown dinner variety,” ooze Politico Playbook duo Anna Palmer and Jake Sherman. “A return to briefing books and policymaking by political professionals who aren’t likely to try to burn down the White House over petty disagreements and jockeying to get in the good graces of the president.”

Translation: “A return to policymaking by political pros who won’t try to burn down the White House with anonymous leaking against the president, since the press no longer hates the president with a white-hot intensity.” On the other hand, leakers are always leaking to get in someone’s good graces, either the president or the leak recipients in the press.

Palmer and Sherman added this quip, which they liked so much they each posted it on Twitter: “In other words, if the Trump White House was like downing a vat of Tabasco sauce over the past four years, the Biden White House will be like sipping unflavored almond milk.”

Adams brought readers back to the reality of Obama-Biden:

Calm and coordinated messaging on all the best human qualities of the new Democratic team is at work in Politico’s report on Antony Blinken, the likely next U.S. secretary of state: “Those who know Blinken describe him with words like ‘polished,’ ‘smooth,’ and ‘kind,’ and often add that he plays the guitar well.”

“On Tony Blinken as SoS: ‘Chief among his new priorities will be to re-establish the United States as a trusted ally that is ready to rejoin global agreements and institutions.’ Also, guitars,” New York Times correspondent Edward Wong wrote.

The Financial Times tweeted, “When Joe Biden enters office in January, his closest foreign policy adviser will be a guitar-playing Beatles fanatic who first started promoting American values as a high-school student in Paris during the cold war.”