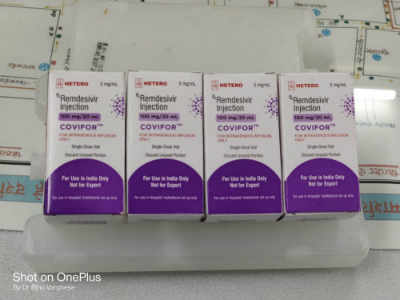 BENGALURU: Administering remdesivir within nine days of the onset of symptoms in moderate to severe Covid-19 patients is associated with significant mortality benefits, a study by doctors in Bengaluru has found.

Between June 25 and October 3, doctors from Apollo hospital, Jayanagar, a dedicated Covid facility, analysed the impact of the antiviral drug on 350 patients with moderate to severe illness. The aim was to evaluate the impact of timing of remdesivir initiation (symptom-onset to remdesivir treatment interval) on patients. WHO recently said the drug does not help treat Covid-19, triggering controversy.

“Our study shows that treating patients with remdesivir within nine days from the onset of symptoms results in significant mortality benefits,” the doctors said. The drug is most effective when administered in the early stages of the disease, when active viral replication is high, doctors said.

Of the 350 patients treated with remdesivir, four patients who developed side-effects were dropped from the study as they were taken off the drug quickly. The group comprised 270 men. The oldest was a 94-year-old man and the youngest a 24 year-old. The mean age was 60 years.

The patients were divided into moderate (109 patients) and severe infection (237) cases. Depending on the day of admission, 260 patients were put on the drug within nine days of onset of symptoms and 86 after the ninth day.

The study shows 76 (22%) died. Among the deceased, 73 had suffered severe infection and three were moderate cases. Of the 260 who received remdesivir within nine days, 174 had severe infection. While 47 or 18% of the 260 died, the fatality rate was 34% in the group (23 severe and 63 moderate) where administering remdisivir was delayed.

“But in this group, 29 patients or 34 % died. The mortality was higher in this group compared to those who had received remdesivir within nine days,” says Dr Ravindra Mehta, chief of pulmonology, Apollo Hospitals, who spearheaded the study.

“Though remdesivir was administered along with other drugs as per protocol, the other drugs were not consistent in all patients. Early intervention of remdesivir proved significant in all other patients who survived,” Dr Mehta said, adding the medical community must consider the date of onset of symptoms and not the day of admission.

Dr Sameer Bansal, Dr Suhitha Bysani and Dr Hariprasad Kalpakam contributed to the study, which has been published in MedRxiv, the preprints server for health sciences. “The study will be submitted to the government,” said Dr Mehta.