New Delhi: Surjeet Singh, diagnosed with chest infection recently, developed breathing difficulty on Sunday around 10.30pm. Within hours, his condition became so bad that the 61-year-old West Delhi resident had to be rushed to ESI Hospital where he was put on oxygen therapy.

With little improvement, the doctors advised Singh’s family to take him to Ram Manohar Lohia Hospital for critical care. But claiming paucity of beds, RML suggested the family take the patient to Safdarjung Hospital. “We went to Safdarjung, but we were turned away there too due to ICU beds being unavailable,” Singh’s nephew told TOI. He added, “My uncle was breathless and we kept running from one hospital to another throughout the night. Finally, at around 5 am, my uncle was admitted to Deen Dayal Upadhyaya Hospital.”

Lalit Gaur, who lives in Naveen Shahdara, northeast Delhi, had a similar story. “My 85-year-old mother’s blood pressure shot up on Wednesday night and she was breathless too. I called several hospitals in east Delhi for admission, and most said an ICU bed wasn’t available,” Gaur said. “We finally admitted her to a small nursing home before shifting her to private hospital on Monday.”

There are hundreds struggling daily to find an ICU bed in Delhi. City hospitals said the spike in Covid cases and exacerbation of respiratory health issues by the high pollution levels had overwhelmed healthcare infrastructure. “All ICU beds in our hospital are full,” said an official at central government-run RML. A doctor at Delhi government’s Guru Tegh Bahadur Hospital in Shahdara said there was no free ICU bed there either.

All major private hospitals like Apollo, Max (Saket, Patparganj and Shalimar Bagh), Fortis (Okhla and Vasant Kunj), Sir Ganga Ram and BLK Super Specialty too have an acute shortage of critical care beds. Many doctors worry that if the corona cases don’t abate, there could be a crisis with deaths due to delay in timely medical intervention.

According to the Delhi Corona App, which provides real-time updates on availability of beds for Covid patients, around half of the 16,313 Covid beds in the capital are free, while 18% of the 1,268 ICU beds with ventilators and 2,050 ICU beds without ventilators are unoccupied. “All hospitalised Covid patients are required to stay for 7-10 days. New admissions can only be done when they are discharged,” a doctor said.

(Names of some patients have been changed on request) 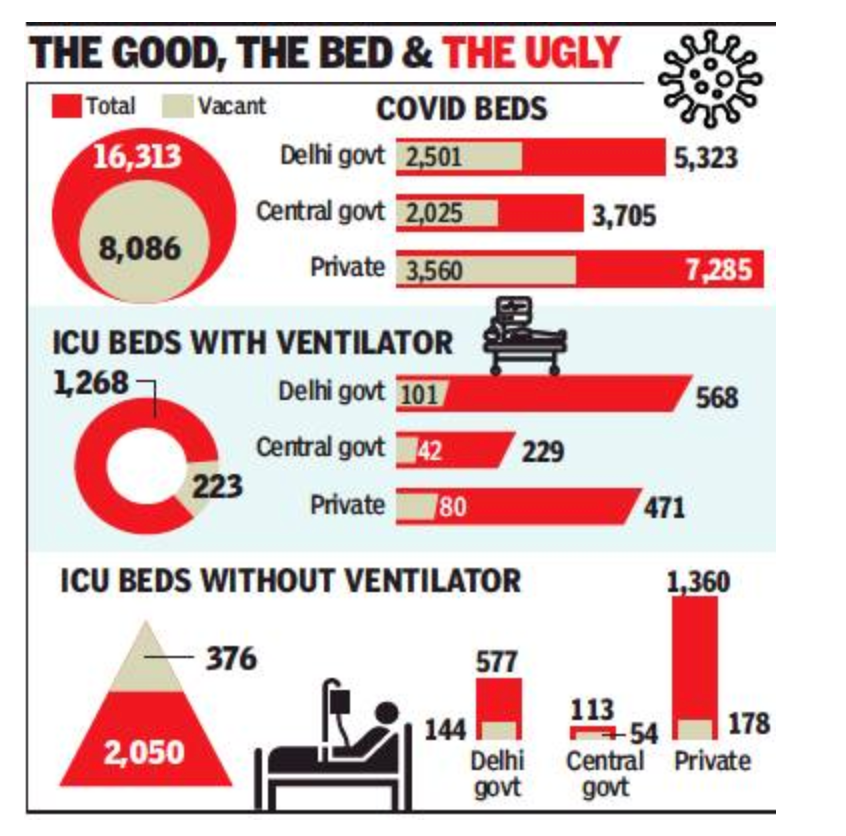